With the rising number of population, living in a condominium becomes the "in" thing. Most people especially those who are working in the city had put much preference living in a condo unit. However, to make living in a condo unit much affordable, most developers are now coming up with smaller units. Living in a very limited space has always been a challenge for some. Therefore, you have to capitalize on your organizing skills. Photos below show smart ways to divide a small space. Designer John Gidding was effective in making the small area to have functional rooms with style. 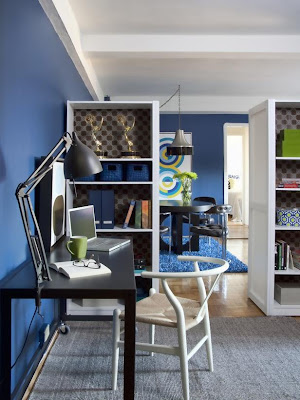 This small space was divided into a dining room and working area by using two storage shelves. A space was just created in the middle to serve as the entry way from living room to the working area. 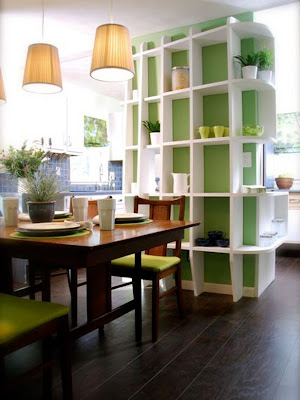 This small space proved that with a creative design, the kitchen can still be separated from the dining area using open storage shelves. The place still looks open and airy and this floor to ceiling shelves can be used to store your beautiful dining wares instead of putting them in the traditional kitchen cupboards. Nice isn't it?
at February 01, 2012